If you struggle with your big feet, it's reassuring to know you're in good company. In fact several glamorous celebrities have large shoe sizes. They may have access to the top fashion designers, but famous women can be really self-conscious about their big feet too. Here's how some celebrities really feel about wearing size 11 US shoes.

Oscar winning British actress Kate Winslet is very down to earth about her size 9 UK feet.

"I've got very, very big feet and they are not particularly beautiful feet either"

She takes after her mother who has even larger feet. Being fairly average height at 5ft 6.5 inches, Kate dispels the common myth that only tall women have large shoe sizes.

She's well used to being teased about her big feet. Her Titanic co-star Leo DiCaprio found it hilarious that they shared the same shoe size (11 US). He even called her feet "canoes". Charming! Even celebrities can't escape the gigantic feet jokes we have all heard too many times. Watch Kate chatting with Conan O'Brien about this below:

Hollywood actress Uma Thurman has size 11 feet and was quite self-conscious about their starring role in Quentin Tarantino's Kill Bill and Pulp Fiction films. At nearly 6ft tall, she struggled with both her height and shoe size growing up:

"I was always physically insecure. Big feet, too tall, not co-ordinated or together."

In fact, it was only in her 30s that she felt comfortable in her own skin:

Was my height an issue? At nearly 6ft tall, with large feet, of course it was!
Once you get a job, you...feel different about yourself and establish your own identity. It took me until about 35 to walk without being self-conscious.

Media mogul Oprah Winfrey has the world at her size 11 feet. But it turns out global icons have the same shoe size hang-ups as the rest of us. In a candid moment with her show audience in 2003, Oprah shared her 10.5-11 US shoe size and how it took her some time to be OK with it:

We can all relate to this. It's crazy how we judge shoe sizes so differently when there is only 1/3 inch between them!

Here's the video footage of Oprah talking about her big feet.

In 2010, Oprah had a great closet cleanout charity auction on Ebay. She sold all her size 10 shoes as part of this, because she realised she was size 11 instead.

It's amazing how many women wear the wrong size shoes. You can find out how to measure your foot on the shoe size conversion help page.

Supermodel Heidi Klum owns an incredible 2000 pairs of size 11 US shoes. Amassed over her 20 year modelling career, Heidi's shoes are neatly organised in her basement with photos of each item. She revealed her shoe hoarding habit to ET Canada back in 2014, so her collection should be even bigger by now.

She is hoping to pass her enormous shoe collection on to her two daughters. Leni and Lou Sulola can't wait to wear mom's shoes. It's refreshing that having big feet is seen as such a positive in the Klum household. I'm sure the prospect of a designer shoe paradise helps.

"My girls are drooling over my shoes... They’re waiting, and they’re worried that they’re not gonna have my shoe size. I have an 11 shoe, so they have to grow into it! If they're not that size, then they’re s*** out of luck!"

PS Heidi, if your daughters don't end up sharing your shoe size, I suggest a big charity raffle so all your size 11 shoe sisters can feel like supermodels. Or how about a Heidi Klum Shoe Museum. How fab would that be?

Hanging on to old shoes, having people make jokes about your big feet, feeling insecure.... we can ALL relate! Maybe having big feet isn't that different for celebs after all. 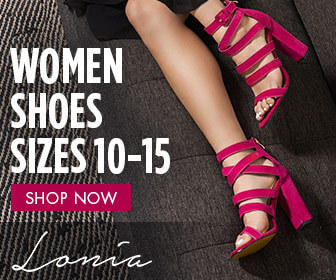